Back in December of 2012, I challenged myself with the 2013 goal of hiking (at least) 60 miles on National Park trails that I had never hiked before [read that post here]. Earlier this month in Kings Canyon National Park, I hiked through my 60th mile beside the Kings River beyond Roads End.

It was a gorgeous fall day, but we felt as if we had the Park to ourselves as we drove the Kings Canyon Scenic Byway along the Kings River as far as we could go by car. We stopped for photographs – sometimes in the middle of the road because there was almost no traffic –

and to take short treks up to Grizzly Falls and Roaring River Falls. 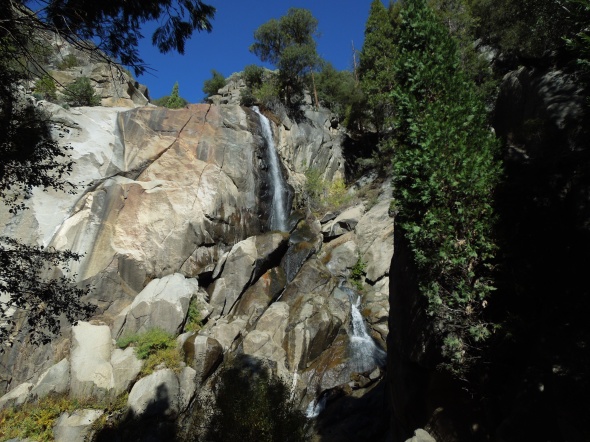 At the Roads End parking lot we put our ice chest in the bear locker and set off up river on the Paradise Valley Trail. The afternoon was suffused with autumn, an array of colors on trees and the ground, pleasant temperatures edged with warmth in the sun and chill in the shade. 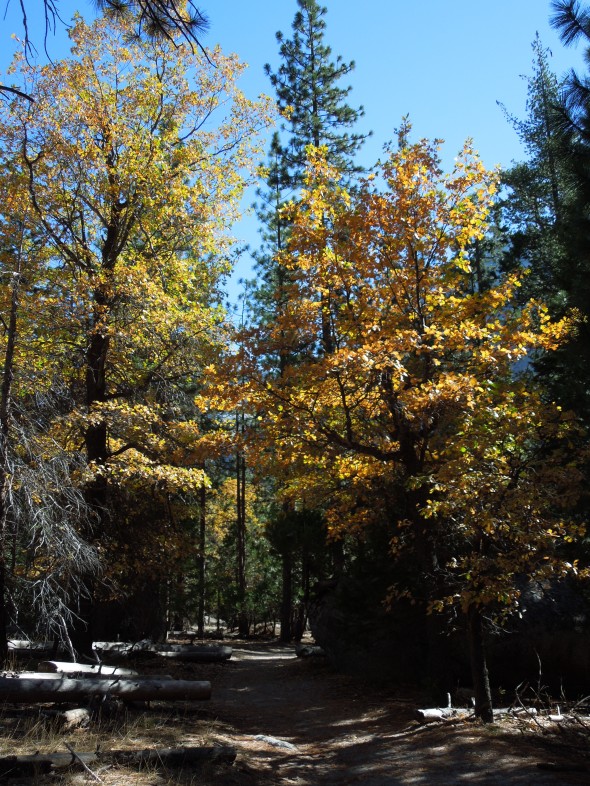 The trail was broad and smooth, mostly level until a little before the two-mile mark where we went into a forest and the trail narrowed, becoming rockier and slightly steeper. We were surprised at how quickly we reached the footbridge over the Kings River where Bubbs Creek flows in. 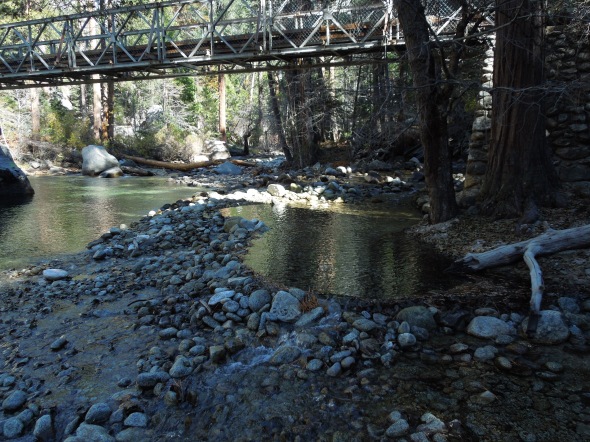 When we crossed the bridge to hike back on the other shore of the river on the Kanawyer Loop Trail, I felt a little thrill knowing that I was starting my 60th mile in 2013. I felt a bigger thrill when about a quarter mile from the river bridge, we spotted a mother black bear leading two cubs quickly across a boulder field about 50 to 75 yards from us. It seemed that our path would take us closer to where they might be as we continued, but they had seen us and moved rapidly out of view, and we never saw them again.

Can you spot the mother bear and one of her cubs?

We didn’t see any other hikers on that side of the river, either. Beyond where we saw the bears, the return trail was mostly broad and level and offered some lovely views of the river.

When we got back to the car at the end of our 4.7 mile loop, I had reached and exceeded my 60-mile goal, and I was pretty happy about that. 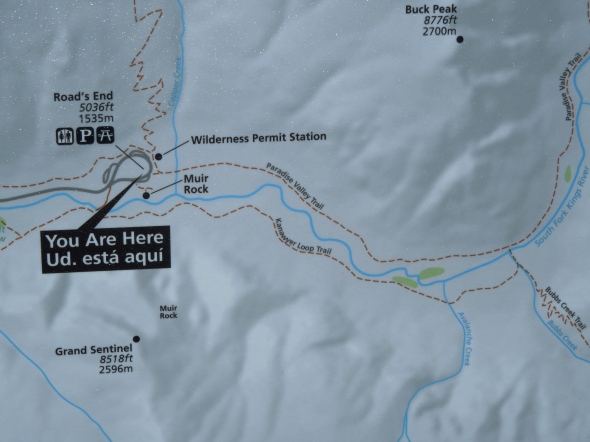 Kings Canyon National Park is open year round at Grant Grove Village and south from there into Sequoia National Park. But the canyon itself where we hiked, and that portion of the Scenic Byway leading to Roads End are closed during the winter.