Yosemite National Park, CA: Sixty in 2013 – Footprints in the Snow 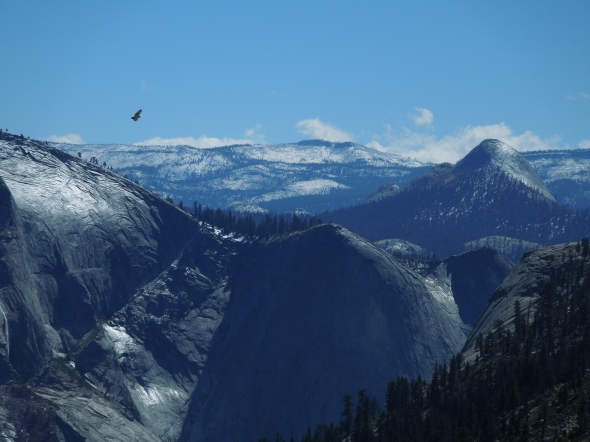 Two weekends ago, we in the San Francisco Bay Area were shocked by the unseasonable deluge that poured down from the clouds onto our long-planned, end-of-summer Saturday activities. Who knew that up in the high country of Yosemite, the deluge would be lighter and whiter? 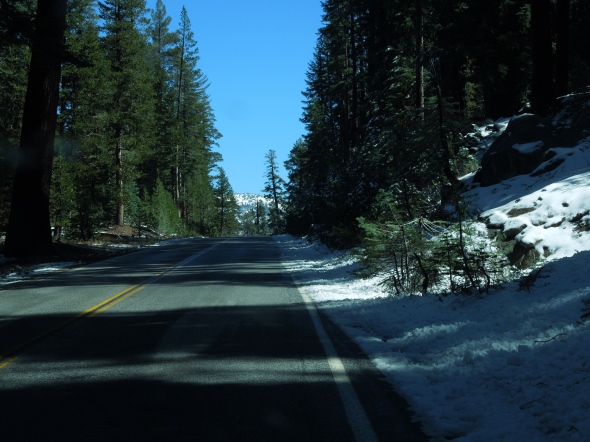 When we arrived at the Park for a two-day visit that Sunday, the first day of autumn, we were thrilled to learn that the Tioga Road had just reopened after being temporarily closed due to snow and icy conditions. That meant no change of plans was required, and we drove up Highway 120, hoping that snow would not prevent us from taking a hike along the southern shore of Tenaya Lake. 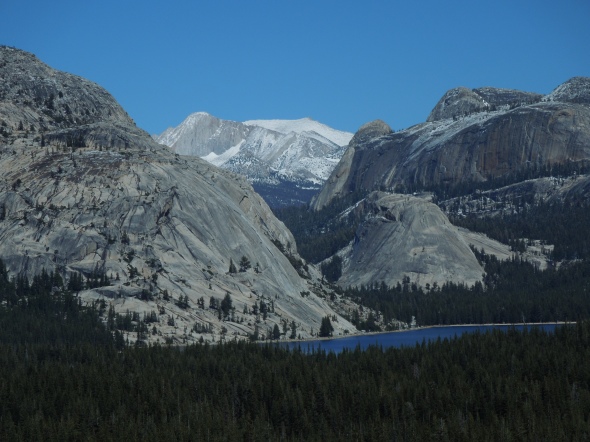 Despite all of the people and parked vehicles on the highway side of the Lake that sunny afternoon, the parking lot at the east end was all but empty. From there we walked a tenth of a mile through forest to the coarse sandy beach where a few other people were messing around by the water and along it to the start of the 1 mile, mostly level trail to the other end of the Lake. What we were counting on to be a gentle way to ease into hiking at higher elevations (the Lake surface is at 8,150 feet above sea level) turned into a once-in-a-lifetime National Park experience.

Before us, the trail stretched white into the woods, its surface pristine. 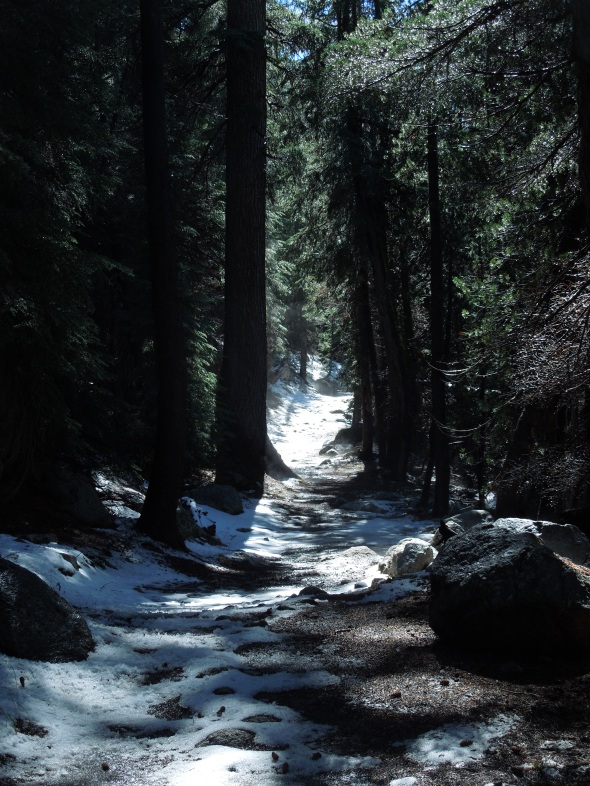 Ours would be the first human footprints since the snow had fallen the night before. The temperature was in the 40’s, so the snow was crunchy underfoot, and the sun coaxed clouds of condensation from the surface of the Lake as well as wet logs and patches of soil along the way. 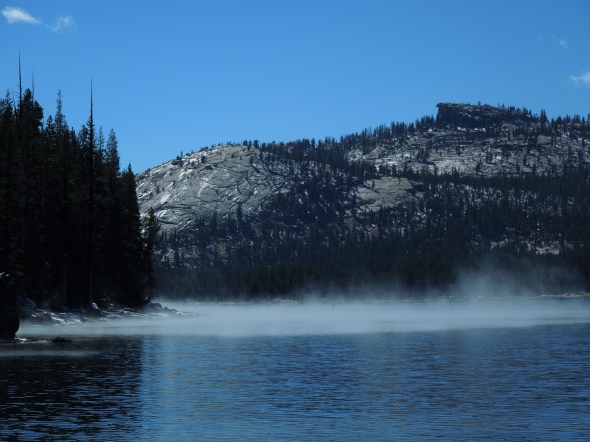 As we traipsed through the white stuff, we began to believe that we just might be the only people taking that trail that day. And we could see that someone else, not human, had also recently felt that the trail was his exclusive territory. 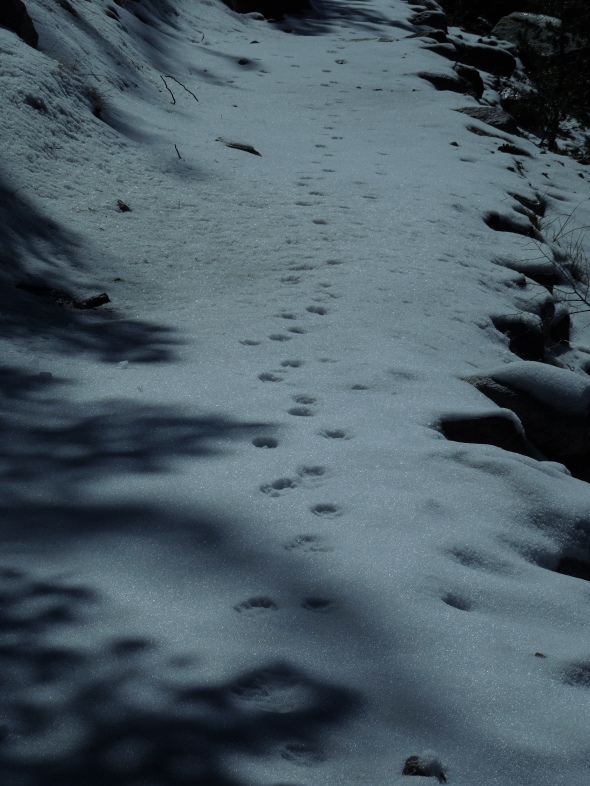 All along the trail, there were gorgeous views of the Lake, but from the west end, the scene was spectacular, and we were the only people on that shore that we could see. 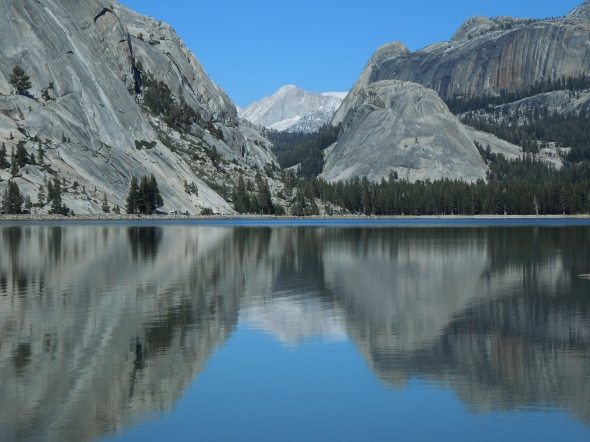 After breathing it in and taking lots of photographs, we returned the way we had come, expecting at any moment to encounter others eager to experience a walk in the woods after an early snowfall. In fact, we never saw another human being or footprint on the trail. The Tenaya Lake area is one of the most popular spots in Yosemite outside the Valley, but for one glorious afternoon – with enough new fallen snow to delight, but not enough to signal the start of winter – we had a part of it all to ourselves. 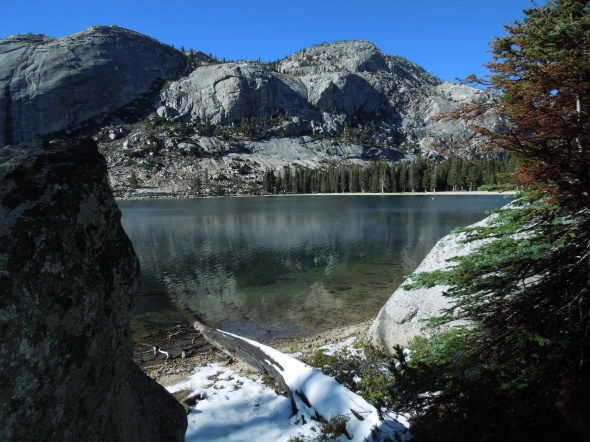