If you’ve never been to the Tetons, magnificence awaits you. The mountains of the Teton Range rise abruptly from the flat sage-covered landscape, creating a wall of jagged beauty that dominates Jackson Hole, Wyoming. Add in the lakes, canyons, streams and waterfalls, as well as a variety of flora and fauna, and Grand Teton National Park offers a spectacular nature experience.

I have had the great pleasure of visiting the Park a half dozen times in my life, both in my childhood and as an adult with my husband and our children. Our most recent visit was in 2007 when one of the highlights was our ongoing search for the huge herd of bison one of my sons found out about, listening to a Park Ranger talking at the Visitor Center on our first morning in the Park.

Oxbow Bend in the Snake River

Seeing bison in the Park was a new possibility for us, and we all agreed that they should be easy to spot, especially in large numbers. We hadn’t seen any of the hairy beasts on our drive along the Teton Park Road from the Oxbow Bend in the Snake River that morning, although we hadn’t known we should be looking for them. On our return circuit from the Visitor Center back to the Jackson Lake Lodge on the outer Park road, we were vigilant. We would find that herd.

After driving for several miles through wide open sage flats with nary a bison in sight, we turned off the road and stepped out at the Snake River Overlook. “Maybe they’re down by the water,” my son suggested. We looked carefully, we visually searched the river banks . . . nothing. And not enough room in the trees down there to conceal hundreds of immense animals.

We kept driving but the only wildlife we saw were some pronghorn antelope in the distance across the flats. At the Cunningham Cabin Historical Site, we took a short detour away from the road and walked out to the sagging wooden structure that

served as first house and then barn for the Cunninghams, homesteaders in the 1880’s when Jackson Hole was populated by them. A perfect place for bison to roam, we thought, but none were about. We did notice that the sun and clouds were playing shadow tag on the grasses, and there was less blue sky than there had been that morning, suggesting that an afternoon storm was brewing.

Storm view from the Oxbow Bend

When we got back to the Oxbow again, the clouds were dark and lowering, and we could see rain spilling out of them over toward the mountains. Somewhere, there was a huge herd of bison about to get a soaking.

The next morning we caught the first boat shuttle across Jenny Lake for a hike up Cascade Canyon. We weren’t

expecting to see bison there, but hoped our early start would reward us with other wildlife sightings. Alas, we were disappointed that a 9 mile roundtrip hike where we saw few other humans yielded only one moose that ran across the trail, and I was among those of us who did not see it (yes, that’s because I was not keeping up with the fastest in the family)!

That evening we continued our quest, and just after sundown, near the Park road, we saw a herd of dark brown creatures over against some trees

Sunset in the Tetons

across an expanse of sage. What do you think they were? Anyone who said “elk” would be correct! But at least it was a herd, and they were the right color. We were getting warmer!

On our final day in the Tetons, we took a morning float trip down the Snake River. It began with promise, as on our way to the raft launch we saw a fox, and then a monstrous moose with a gigantic antler rack foraging in the trees and undergrowth near the Oxbow.

Rafting down the Snake River

Once on the water, we saw birds of many kinds, including bald eagles, a pelican, bluebirds, osprey and bank swallows, and a single pronghorn antelope at the water’s edge. As we floated along on the quiet river, we became aware of a low droning sound, kind of like a didgeridoo. Or didgeridoos. It got louder, and weirder, and then we saw them. Bison! Lying down on the bank slightly above us. Had we found the herd? Down by the river after all? But no. For all of the noise they were making, there were very few of them, not more than a dozen. We asked our float guide what he knew about the Park’s bison, and he could not solve our mystery.

That afternoon we gave it one more try, driving south again past Moose Junction to the Kelly Loop Road at the southeast boundary of the Park. Near the Gros Ventre River and the National Elk Refuge, we found them. Bison. Lots of bison.

On both sides of the road. In the road. Crossing the road. There was no other traffic, so we slowed and stopped the car, taking it all in. The animals ignored us and put on quite a show. At times I was sure the ground shook. I could almost imagine what it must have been like when buffalo stampeded by the thousands across the prairies of the western U.S. Can you? 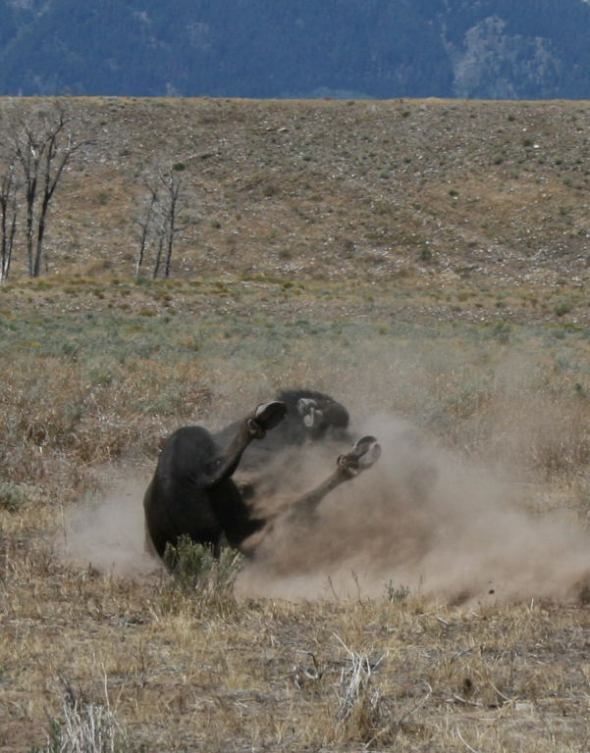 Bison rolling in the dust