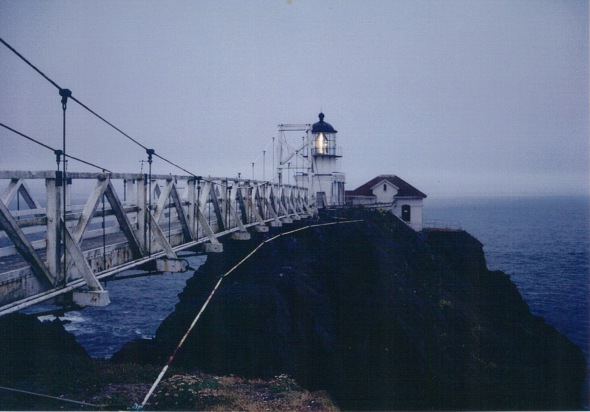 I have a confession to make. I love lighthouses. So when there is a lighthouse within the National Park System – a relative rarity in the Western United States – I am going to find a way to write about it here. This week it’s Point Bonita’s turn.

Last Friday, the last day of August, as my husband and I sat in Stanford Stadium watching the Cardinal play (and win!) its football season opener against San Jose State, we had a perfect view of the second full moon in the month (a “blue moon,” too) rising in the eastern sky. 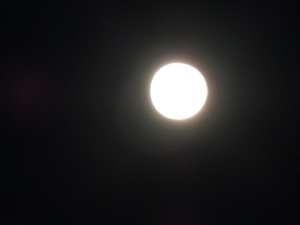 It was big and burnished and beautiful, and soon it disappeared completely into the thick marine layer of overcast that had hung over the Bay Area all day. Observing that play for celestial and atmospheric dominance reminded me of our sunset, full moon hike to Point Bonita Lighthouse a decade ago.

The lighthouse sits at the northwestern point of the entrance to the Golden Gate, way out on the ocean side of the Golden Gate Bridge. Built in 1855 in response to increased ship traffic in the port of San Francisco brought on by the California Gold Rush, it was originally situated in a different location from where you find it today, and it was 300 feet above the water level. At that height, however, its light beam was often obscured by fog, rendering it ineffective. 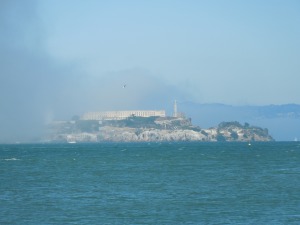 So the lighthouse was moved lower onto nearby Point Bonita where its light has been an active aid to navigation since 1877. It is now included in the Golden Gate National Recreation Area, one of the largest urban national parks in the world.

You may know that fog is an essential ingredient of life in and around San Francisco. It wends and 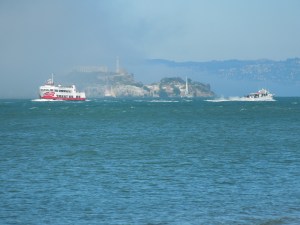 Less than 5 minutes later, more than half of Alcatraz Island is obscured by fog

wafts its way in and out of the Golden Gate, sometimes spreading over parks and neighborhoods and points east until the whole area is wrapped in a damp, gray cloak. Other times the fog huddles close to the coast and the west part of the Bay where visibility is reduced to a few feet, while the rest of the Bay and the city and points east are swathed in sunlight. So there is an element of luck involved when planning a hike under the full moon to a point above the Pacific Ocean, west of the Golden Gate Bridge.

When we arrived at the trailhead that May evening in 2002 to meet the other hikers and our guide, there was no fog in front of our faces, but there was a pretty persistent marine layer overhead, spreading eastward. 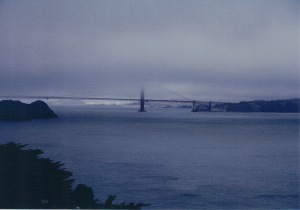 Less optimistic folks would have already concluded that the moon would not make an appearance that evening, but we were hopeful.

As we hiked the half mile trail along the cliffs above the Bay and through the tunnel carved out of the rock, approaching the lighthouse, the sky was just getting darker, not clearer. At some point we accepted that not only would we not see the moon, we wouldn’t even see a sunset! But we did see and tour the lighthouse, crossing the old, weakened bridge (replaced in 2010) a few people at a time to the lantern room. The hike and the visit were an invigorating way to spend the evening, although it was not the outing we had anticipated. 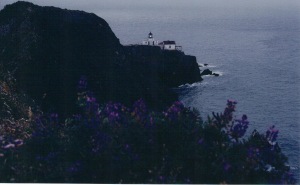 You may be wondering what’s so difficult about timing a full moon hike for when the sky is clear and the moon is visible. Just pick a fogless night when the moon is full and go for it, right? That would be ideal, but because access to Point Bonita and the number of participants are limited, advance reservations through the Golden Gate National Parks Conservancy are required. After that, it’s all up to Mother Nature!