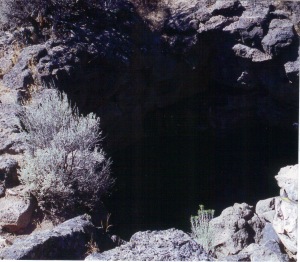 If reading my post about a guided tour of Lehman Caves in Great Basin National Park, Nevada, whet your appetite for spelunking, AND if you live near northern California or are willing to make a visit, then Lava Beds National Monument is the place for you.

Located in remote reaches of Siskiyou and Modoc counties not far from the Oregon border, the Monument features more than 700 lava tube caves, formed many thousands of years ago during volcanic eruptions in the geologically volatile area. Many of these caves are open for exploration on your own, with a flashlight and a hard hat and a good dose of common sense.

Don’t have a full day or longer to visit the Monument? Not a problem. Even a partial day spent spelunking, as my family and I did when we visited in 2006, will give you an excellent taste of the volcanic underground. 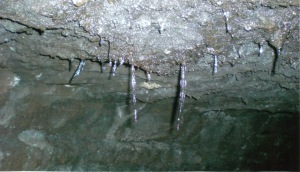 The Park Rangers inside the Visitor Center are a great source of suggestions and advice for your cave adventure. And Mushpot Cave, right outside the Visitor Center, is a great place to start. Going down inside eases you into the underground experience, as Mushpot has some lights, and exhibits explaining the cave features and how the caves were formed.

There are close to two dozen other caves open for exploration in the Monument – depending on the season, some might be closed to humans to protect nesting bats – and you can choose which ones you want to explore.

Our spookiest spelunking was in Gold Dome Cave. It presented a complex of twists and turns branching off in various directions, and more than once we wondered if we were about to meet up with Becky Thatcher and Tom Sawyer! Turning off all of our flashlights and waiting for our eyes to adjust to the darkness . . . and still not being able to see a thing in the complete blackness was creepy and cool at the same time. 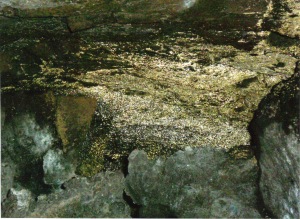 Bacteria look like the real thing in Gold Dome Cave

When we turned our lights back on with the intention of leaving the cave, we really weren’t sure which way to go. We went back the way we thought we had come, but nothing looked familiar! Not panicked, but getting a little worried in a self-indulgent sort of way, we tried various routes without success. And of course, when you have 6 people who all “know” the right way to go, chaos can result!

One of my teenagers offered this reassurance, “Don’t worry if we can’t find our way out,” he said. “I bet the Park Rangers will check parking lots before they go home tonight and they’ll see our car.” True? Don’t know. But we never had to find out. Soon, as we continued along the path, the cave’s stillness was stirred by invisible tendrils of moving air, and the floor of the cave slanted noticeably upwards toward eventual daylight.

Valentine’s Day Cave, named for the day it was discovered, also has opportunities for total darkness immersion with lots of chambers to explore off the main path. 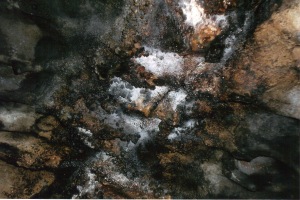 Skull Ice Cave was delightfully goose bump inducing on that warm summer’s day. The temperature change was immediate upon descending into the cave, and the metal handrails were cold to touch, but necessary to use going up and down the steps and ramps inside. You don’t get to walk on the ice, but some is visible behind a gate, put up to protect the clarity of the ice from being degraded by contact with dirt on people’s shoes. (There is another ice cave in the Monument, Crystal Cave, open for small-group, guided visits in the winter only. The tour is a frigid and strenuous experience of about 3 hours, but you do get to walk on the ice – lots of it!)

Sunshine Cave was a contrast to the darker ones. Parts of its roof had collapsed while the lava was cooling thousands of years ago, so there were many places where light, plants and other surface features came through from above. 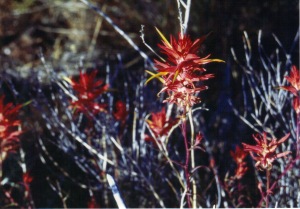 Many places also required crawling through on hands and knees.

Want more? Go visit the Lava Beds, and choose your spelunking adventure. Total darkness, natural light, ice, stalactites, room to walk upright, low ceilings that require squat-walking or crawling. All that and more are waiting for you. Scare yourself. Challenge yourself. Reward yourself. And have fun!