It is a disappointment when a long-planned national park visit coincides with closure of a favorite trail or limitation of access to a major park feature.  So we were thrilled when our visit last Sunday to Bandelier National Monument an hour northeast of Santa Fe, New Mexico, turned out to be the day before the trail to Alcove House was to be closed for several days for ladder replacement.  We briefly questioned the wisdom of climbing tall, steep ladders that are in need of replacement, but quickly decided that the National Park Service is not in the business of putting park visitors at risk. 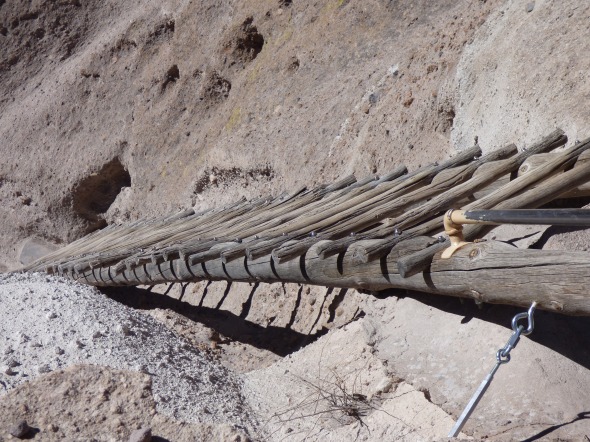 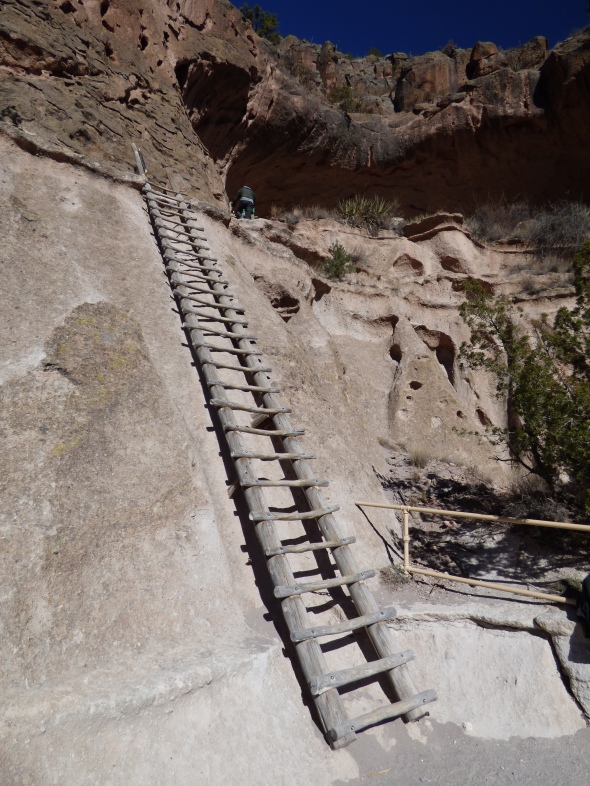 Happy to spend a few hours once again in Frijoles Canyon at Bandelier, we took the trail behind the Visitor Center with the Trail Guide in hand and walked back  in time.  Ancestral Pueblo people settled in the area around 1150, and lived and farmed there until about 1550.  Modern Pueblo people who live nearby believe the spirits of their ancestors still inhabit the canyon.

The main trail goes through the ruins of the ancient village of Tyuonyi (QU-weh-nee) on the canyon floor, 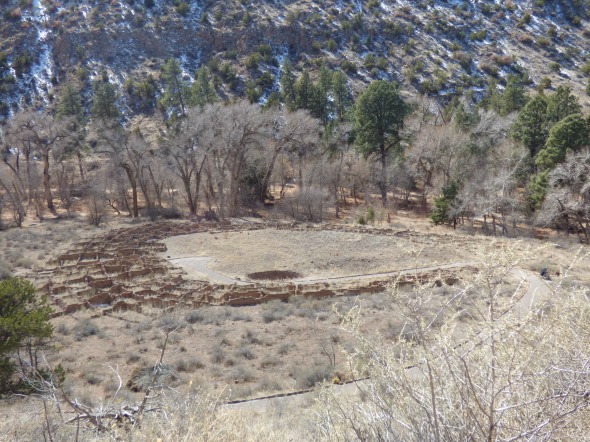 then to the cliff dwellings higher up the canyon walls.  There are cave rooms (cavates) that inhabitants dug into the volcanic tuff walls, as well as the ruins of stone dwellings they built next to the walls of the canyon.  Many of these dwellings were more than one story high, and the horizontal rows of round holes are where roof beams were.

Entrance to Cave Kiva (a cavate), reconstructed for visitors

Looking down at Tyuonyi from Cave Kiva 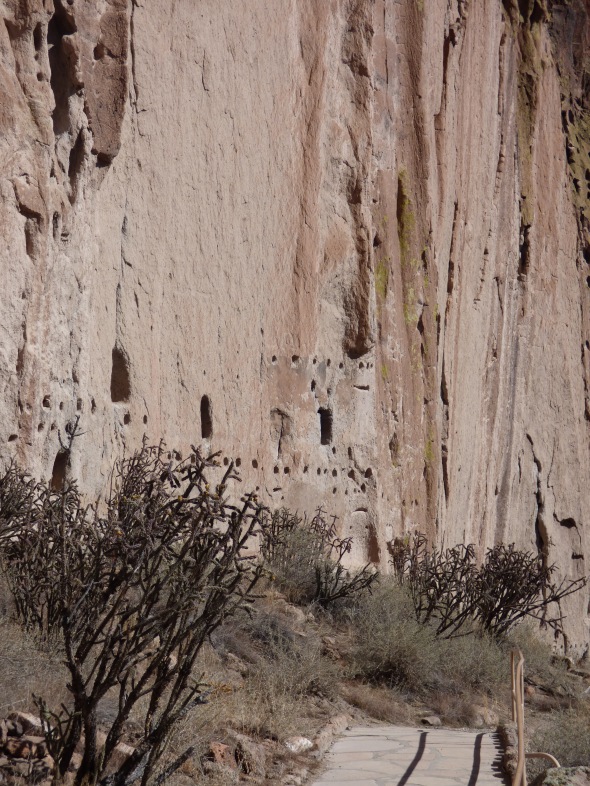 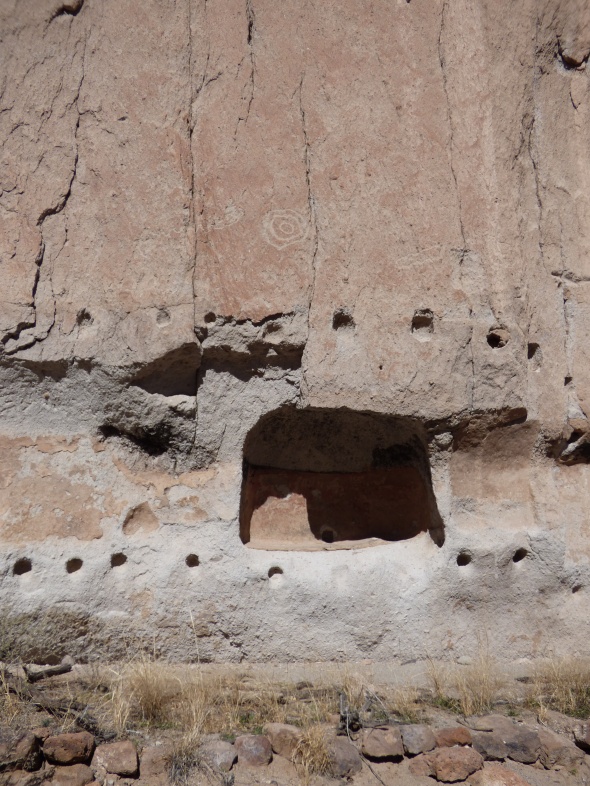 From the end of the Long House section we chose not to follow the loop trail back to the Visitor Center, but to continue up canyon another half mile under the trees along Frijoles Creek to the ladders up to Alcove House.  There is a sign near the first ladder suggesting that if you have health problems or a fear of heights, you should not attempt the climb which goes up another 140 feet above the over 6,000 foot elevation of the canyon floor.  Heed this sign!

Having made this climb before, we knew what we were in for, and I’m happy to say we successfully made it up to Alcove House once again. 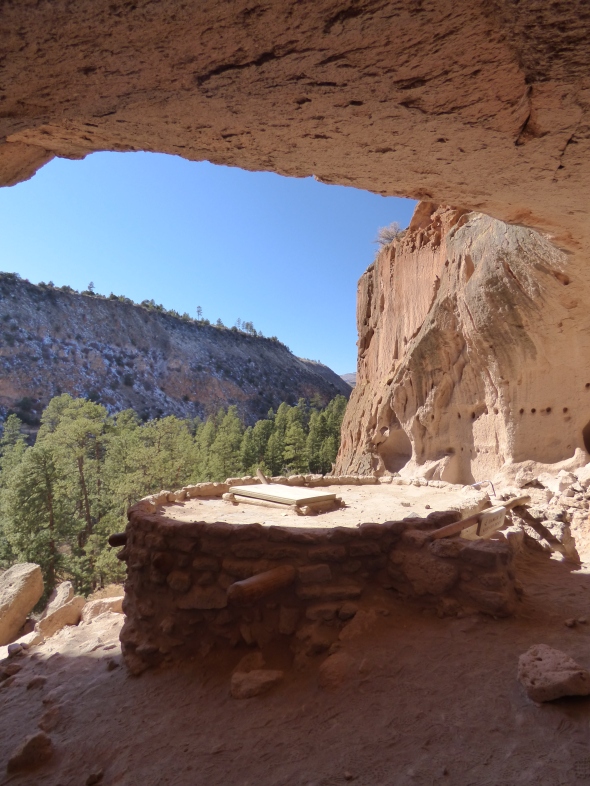 We also made it back down the ladders, which for some might be more problematic than the ascent.

The return to the Visitor Center was 1.2 miles of level trail along and crisscrossing the creek, a peaceful walk in the late afternoon with a chill settling in.  Aside from a few other humans, the only creatures we saw were a group of deer whose instincts told them they really didn’t need to be afraid of us.  Just as it should be inside a national monument.

[Note: Before you visit any national park or monument, check the “Alerts” tab on its website to find out about trail or road closures, limited access to park features or prescribed burns.]