Yosemite National Park, CA – Sixty in 2013: To the Top of Yosemite Fall 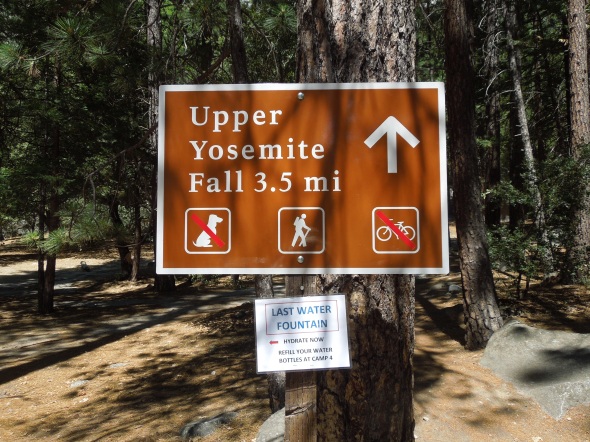 It’s almost as if the National Park Service is in on it. As if they know I’m turning 60 this year, and they know about my sixty in 2013 goal. For shortly beyond the trailhead to the top of upper Yosemite Fall, a well-placed sign informs us that the first mile of this “challenging, wilderness trail zigzags up about 60 switchbacks to Columbia Rock.” Perfect!

If you are a hiker, you know that switchbacks are about the only way to climb really steep terrain. So we expect 60 switchbacks up a mile of trail to be brutal. It is! And it is just the beginning. 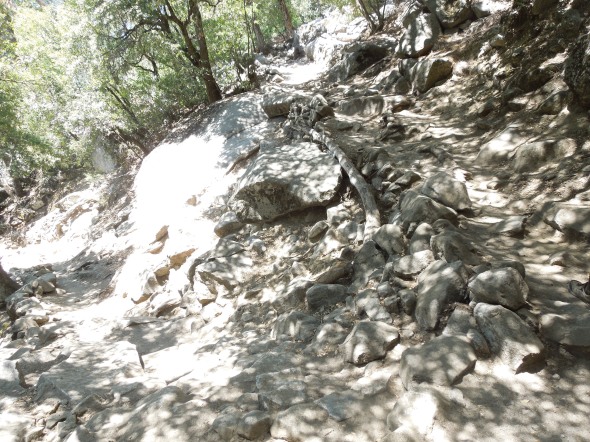 Switchbacks on the trail

Having left our home in the east San Francisco Bay Area that morning to drive to Yosemite, we hit the trail up to the top of the Fall at about 11:20 a.m. I think about counting the switchbacks as we climb, but quickly decide it would be better just to focus on the hike. There are quite a few people on the trail, the large majority of them much younger, and quite a few already on their way back down. But that is one of the beauties of a National Park trail: it is there to be used by whomever, whenever. 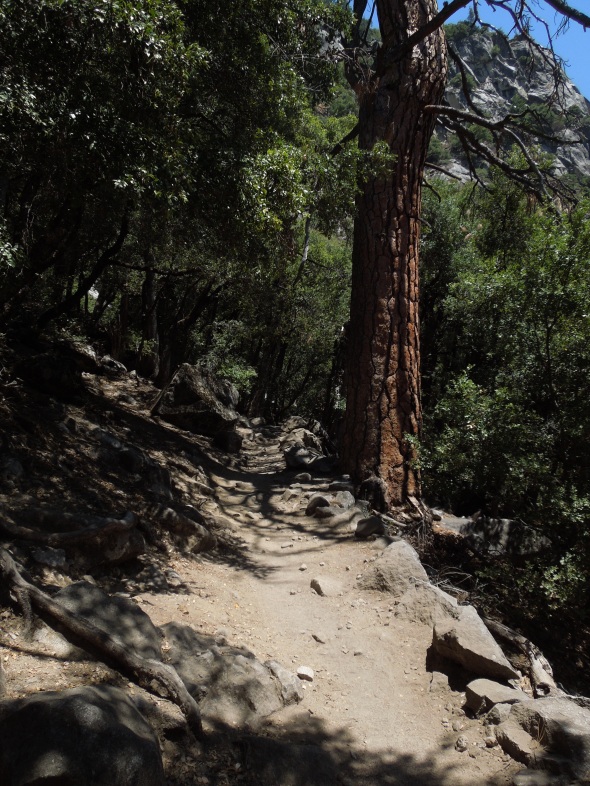 So, up we go. Slowly, steadily, the trail, relentlessly. Up and up and up. The trail is dirt and rock, some rock stair steps, and stretches of closely packed rocks dusted with dirt that are treacherously slippery. Not falling requires careful attention to where you put your boots, as does conserving as much energy as possible. The trail is shade and sun, and the air temperature is in the 70’s, not bad conditions for this hike.

Eventually we reach the end of the 60 switchbacks at Columbia Rock, and the promised panoramic views of the Valley and the Merced River below, Half Dome, the mountains in the back country beyond, and Glacier Point across the way make us forget momentarily how hard we had to work for them! They cry out to be photographed, and I oblige. 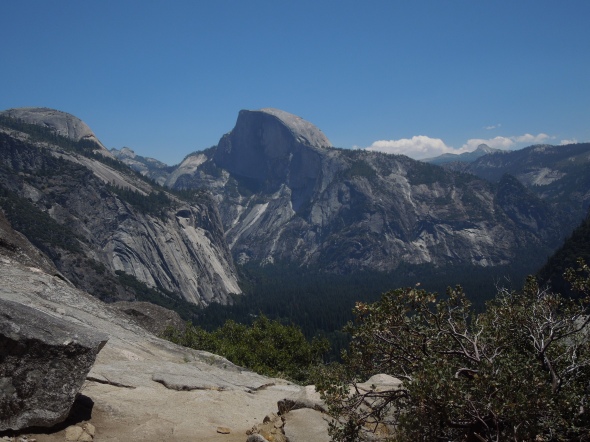 Half Dome from Columbia Rock 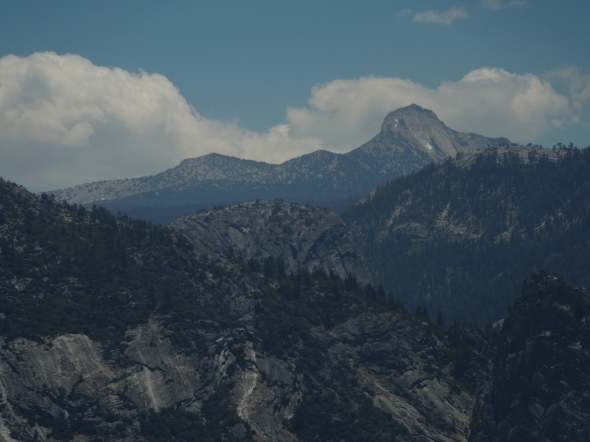 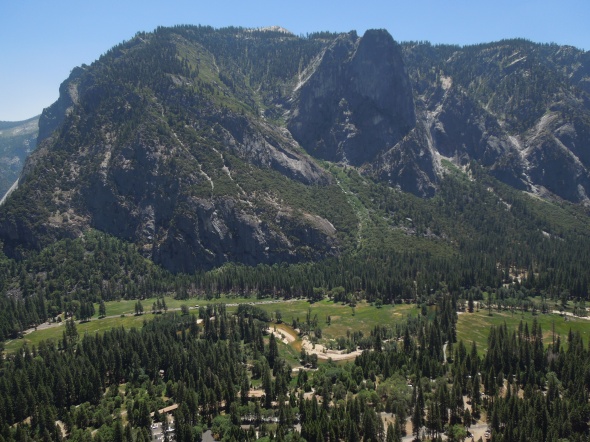 The trail ascends very steeply beyond Columbia Rock, and then . . . it starts to switchback downhill. This can’t be right, I’m thinking. We just killed ourselves to gain all that elevation, and now we’re descending? But the trail continues down and then almost levels out for a total of about a half mile, along its course yielding a full on view of upper Yosemite Fall. 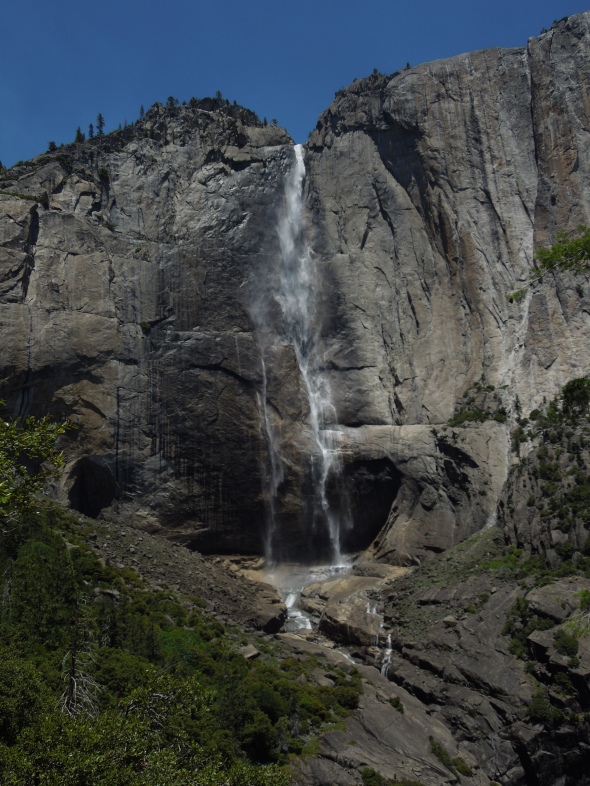 The liquid white ribbons shoot over the precipice and stretch to the bottom of the drop. As we get closer, a breeze pushes light spray in our direction, a welcome whisper of cool. But it is hard not to think about how high above us is our destination!

From there, the trail continues up a draw to the west of the Fall, and it disappears from view. 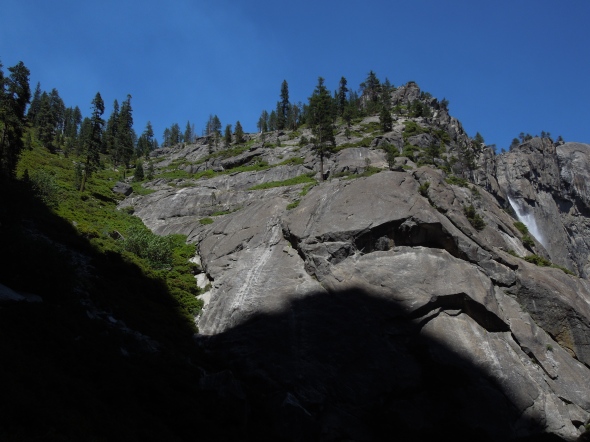 Most of the trees disappear as well, and the green along the switchbacking trail is predominantly manzanita scrub. We soon realize that our late start on the hike has an unforeseen benefit because the sun is already dropping behind the granite wall above this part of the trail. The shadows climb straight up faster than we traverse the switchbacks, so we avoid the sun’s direct heat on most of the last two relentless uphill miles of the trail. 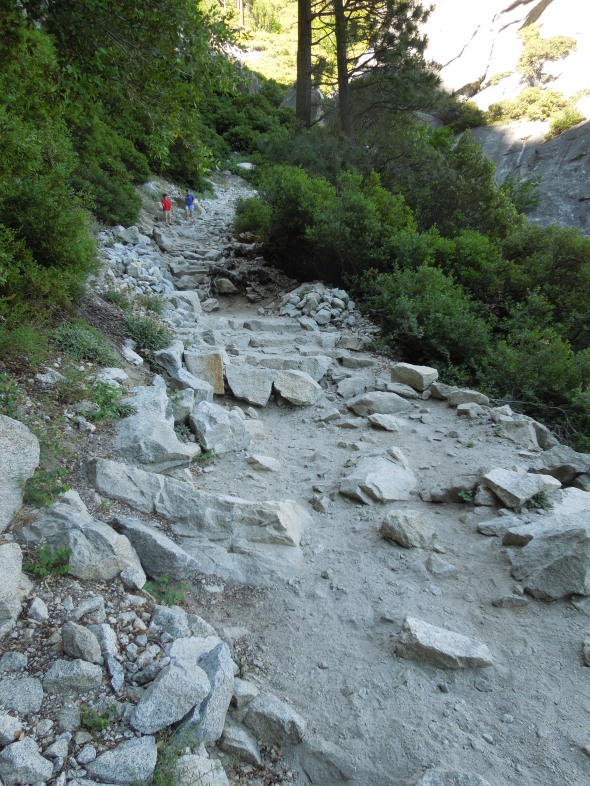 As on any strenuous hike, prudence requires periodic assessment of whether one will have enough left in the tank (and the legs, knees and feet) to make the return trip after reaching the goal. I don’t remember the last time I was on such a physically demanding hike (and whenever it was, I was much younger!), but I am determined to succeed, and I’m not a quitter, so we keep going. A juicy apple provides an assist as I hike, but chewing and swallowing while gasping for breath is harder than you might think, so I sit down to finish it!

Ultimately, we get to the top of the Fall, and rock scramble, partially along a rock staircase with a handrail, to the overlook. 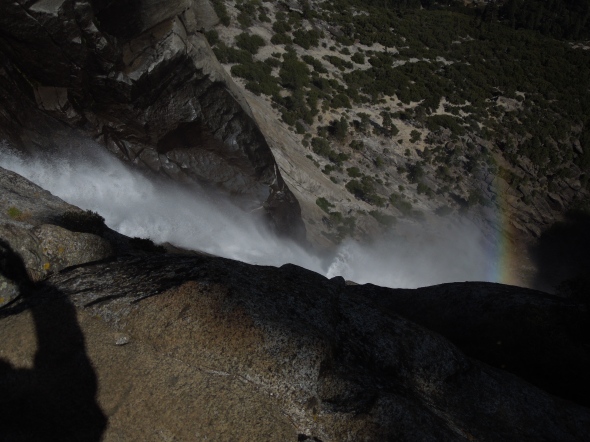 The power of the water beneath us as it plunges over the edge and through a rainbow, and the beauty of our surroundings in the late afternoon light add to my sense of accomplishment and the pleasure of being there. 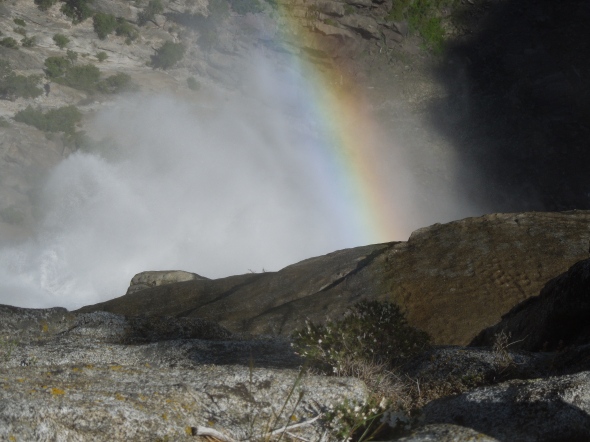 Soon it is time to start back down the trail. Except for the fact that we are not breathing hard, the descent is almost as challenging as was the ascent. The rocky trail is treacherous, and stepping carefully when knees and leg muscles are feeling weaker demands full concentration. Frequent rest stops allow for more photos, and everything looks different in the evening light than it did on the way up. There is more water falling as snowmelt from the day’s heat at higher elevations increases the flow. 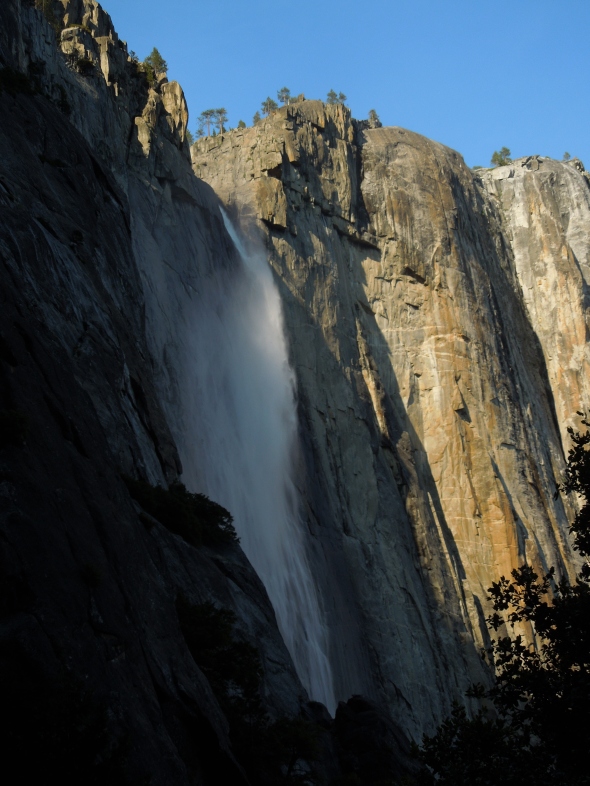 We are making better time on the way down than we did on the way up, though, until we get to the uphill section just before arriving back at Columbia Rock.  But we handle it, stop once more to enjoy the view, 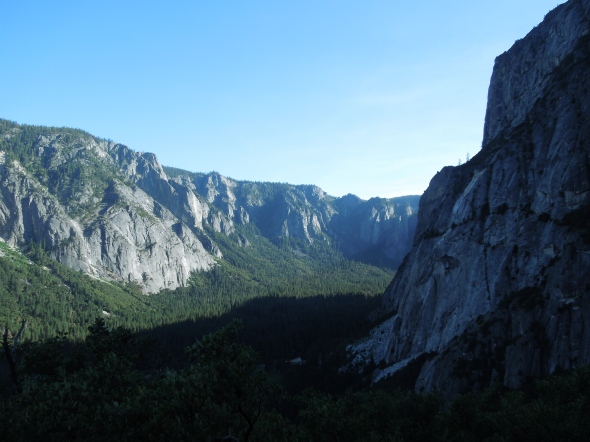 and then continue back down the 60 switchbacks to the trailhead. 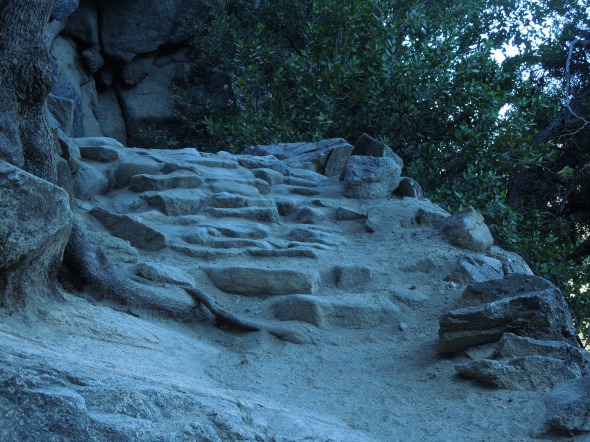 One step at a time, bordering on agonizing as we near the bottom of the trail, gets the job done. The day’s yield: a total of 7.4 miles with a net elevation gain of 2,600 feet (although we climbed a few hundred feet more than that with the reverse up and down near the middle of the hike!). Yay!!

In all of my previous visits to Yosemite National Park, I have never managed to attempt this hike. But now that I have been to the top of upper Yosemite Fall and made it back down, as well, I will never be doing it again!! I will be content to look at the Fall from anywhere else in the Park and know that once, one memorable day, I stood above it.

6 thoughts on “Yosemite National Park, CA – Sixty in 2013: To the Top of Yosemite Fall”