My car was one of the first to go into Lassen Park at the Sulphur Works on Highway 89, just beyond the Kohm Yah-mah-nee Visitor Center, when the road opened again last Thursday, this time for the season.  It was open temporarily over Memorial Day Weekend, and then closed again so that essential repairs could be continued where hydrothermal activity had been undermining the road bed at the Sulphur Works.  Traffic will be one-lane still for a time, but I’m not complaining.

There was not much snow in the Park, even at the higher elevations, although some trailheads were buried by plowed drifts, and there was yet enough white stuff on Lassen Peak to obscure much of the trail to the top.

Beginning of the Peak trail viewed from the trailhead parking lot

Parking lots were nearly empty, and traffic was light.  It was a pleasure to be among the first visitors of the season.  I reveled in coming upon each familiar landmark as I wound my way up to the highway’s summit and down the other side, not resisting the urge to stop frequently at pullouts to take photos.  Others were doing the same, including a couple of rough-looking guys who parked their Harleys across from Kings Creek Meadow and dismounted to photograph each other with the Peak in the background.  Lassen Volcanic National Park’s charms are irresistible! 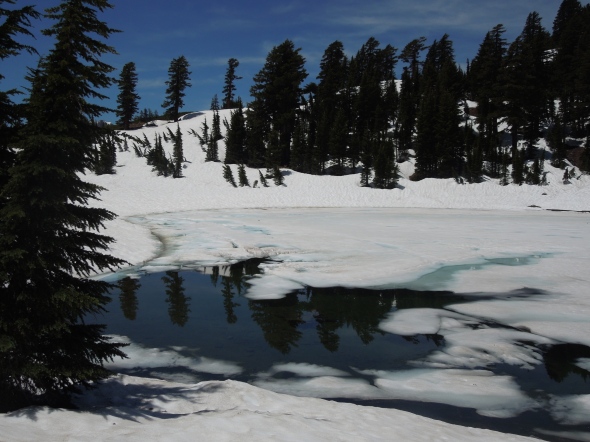 It was unseasonably warm for early June, and unusually muggy, and I hadn’t planned to take a hike that day, but when I reached Hat Creek, and saw the familiar trail to Paradise Meadow disappearing into the forest, I surrendered to the call of the path into the woods.  I was wearing my hiking boots, and I had brought my hat, so I slathered sunscreen on my bare arms and headed in.

I had hiked that trail at least a dozen times over the years since I was a kid, but I was a bit startled to realize that the last time was almost 20 years ago with my family when our children were very young.

It’s 1.4 miles of a pretty steady pull up to the Meadow, and as I hiked along the dirt trail with its dusting of brown pine needles, alone with the trees and the sounds of mountain water, it was as if all of my previous visits were somehow part of this one, the trail almost as familiar as if I had hiked it the day before.

How does that work?  How does the present erase the years between now and the past?  Or is it that one’s heart and soul have “muscle memory”?  I don’t know the answers to those questions, but I do know that the entire experience of that hike was like being with an old friend again after a long separation.  We just picked up where we had left off before, as if no time had passed at all. 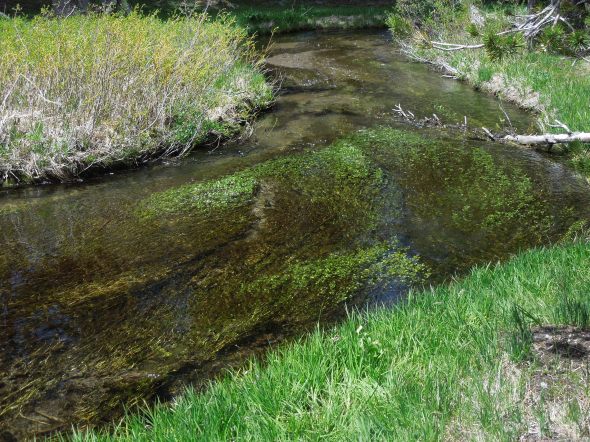 And the next day . . . not a hint or twinge of pain or stiffness anywhere in my body . . . explain that!