While I am not a triskaidekaphobe, I confess I do not love the number 13. So the prospect of that number being a part of every day for a whole year was bothersome. But then I came up with a tonic. Sometime around the middle of 2013, I will be turning 60. (Yes, I do know the exact date, but it is not important for my purposes here!) So I decided to make that number – 60 – my focus for the next year.

As it relates to this blog, the number 60 refers to miles of trail within the National Parks System. I have decided to hike (at least) 60 miles on trails new to me during the course of 2013. There are National Parks large enough in which I could probably hike the entire 60 miles if I wanted to. But I would rather spread the miles around and visit more Parks, if I can.

I do have some candidates in mind. Getting to the top of Yosemite Falls is high on my list, and the Park is close enough to home that I think I can make it happen. My husband is ready to take on this ascent and more hiking, as well.

Grand Canyon from the South Rim

Other possibilities would require more travel, but include trails at the North Rim of the Grand Canyon (we have never been there), as yet unhiked trails in Zion National Park, 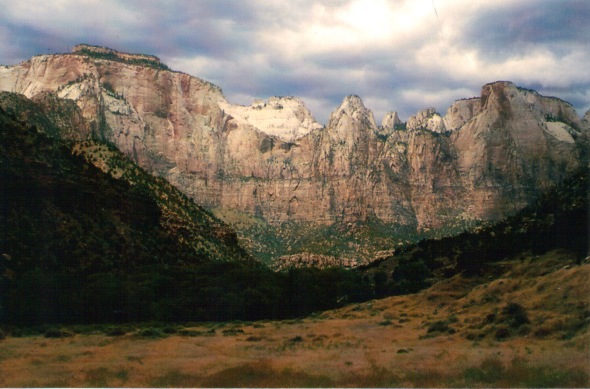 and Olympic National Park. Also on the list and in California are Death Valley National Park, Sequoia and Kings Canyon National Parks, the nation’s newest, Pinnacles National Park (also close to home, and we’ve never visited), and I’m totally open to your suggestions! Just thinking about this challenge fills me with anticipation, excitement and determination. So tell me about your favorite National Park trails.

During the course of the year, I will update you here on my new hiking experiences, as well as continue to tell you stories of past National Park visits and adventures. I hope that 2013 is a good year for all of you. Go out and go in, if you can!