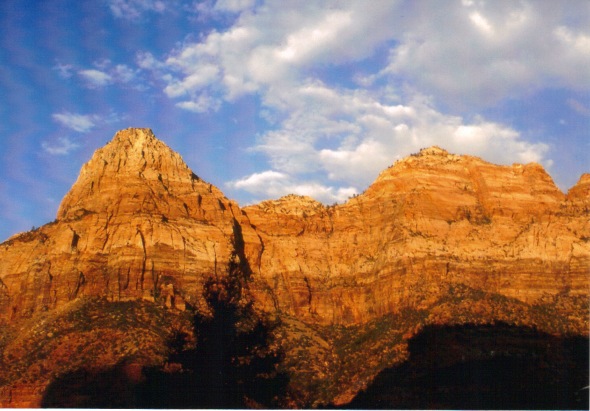 I realize that as wild weather, the short, dark days of December and winter chill surround us, it can be difficult to remember the challenges of staying cool in the heat of summer. But imagine it is late June. The summer sun is up early, and as the day progresses, the rich hues of Zion National Park’s rock walls will absorb the sun’s heat and radiate it back until well after the later shadows settle in. High temperatures in June are in the 90’s – in the shade. 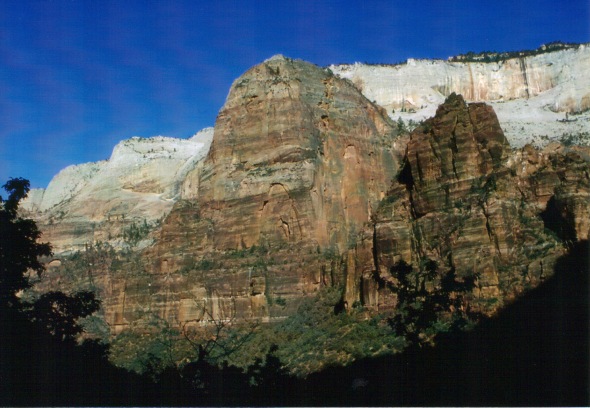 Keep in mind for a moment that the key words here are “sun” and “shade.” If you’re not a hiker, you can perfectly well enjoy the beauty of Zion Canyon from the floor by riding a shuttle (or driving your car when permitted) along the Virgin River, gazing up at the colors and strata of the monolithic walls and domes towering above. But if you want to take in the views from the top, you must hike up. There are no roads on the canyon’s rims. Only trails.

So here is where those two key words come into play. Zion Canyon runs approximately north-south, so the eastern walls are in the shade in the

mornings, and the sun in the afternoons. Our destination, Observation Point, awaits at the top of the east rim, more than 2,000 feet above the canyon floor and four miles away by trail, one way.

Knowing what we did that June day in 2005, we started our hike in the morning, taking advantage of the cooler temperatures while the trail was still in the shade. This was the summer trip when all four of our kids were teenagers – the day before we climbed Angel’s Landing – so to say this was a family hike would be a stretch! It was a little bit more like the tortoises (my husband and me) and the hares (the kids) on the trail. 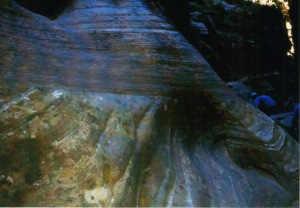 The hike started out on steep switchbacks up the side of the canyon wall. Even in the shade we were sweating, but it wasn’t nearly as bad as it would be later when the sun came over the top of the rim. When the trail turned east, we entered Echo Canyon through a red rock slot that has had a serious relationship with water through the years. It was cool there, with some sunlight filtering from above, revealing amazing swirls and patterns on the red, pink and brown rocks.

The trail continued to climb, as did we, and we enjoyed views back toward Zion Canyon, as well as into the upper reaches of Echo Canyon, as we left it below. At some point our shade advantage disappeared, and we were in full sun. But morning temperatures were still cooler than they would be later. Up and up we climbed, we “tortoises” periodically catching sight of the “hares” on switchbacks above us, sometimes even catching up with them when they stopped for an extended rest!

When we reached the top of the rim, we had about another half mile to hike to Observation Point. Along this last, mostly level, stretch of the trail, abundant varieties of wildflowers including purple aster, blue bonnet, Indian paintbrush, yucca, and blooming prickly pear cactus added more color to the Zion palette. When we all finally gathered at Observation Point, the apples we had toted from our car and anticipated all the way up crunched most deliciously! 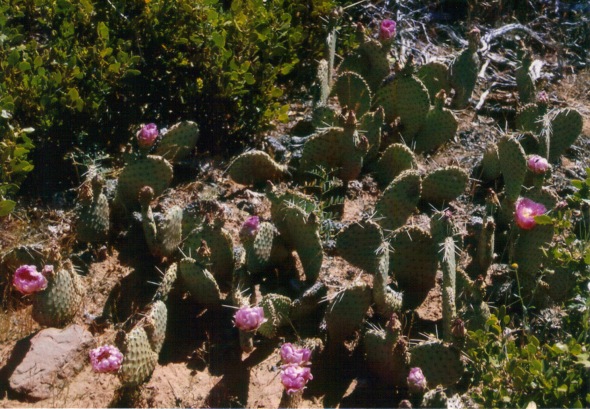 Prickly pear cactus in bloom on the east rim

Looking down on Angel’s Landing and down Zion Canyon

The views matched our expectations. From an elevation of 6,500 feet, we looked down on Angel’s Landing, down the length of the canyon toward the Park Entrance at Springdale, UT, and down on the Temple of Sinawava at the entrance to the trail along the Virgin River to the Narrows. 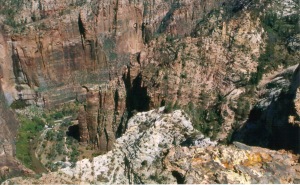 Looking down on the Virgin River and the Temple of Sinawava

By the time we got back to the shuttle stop, we had added a detour off the main trail into Hidden Canyon. That trail took us up more switchbacks and then on a slippery scramble through some amazing nature-sculpted rock formations.

When we finally climbed on the shuttle bus, the temperature was still rising, but we were finished with our hiking for the day. Between nine and ten miles and well over 2,000 feet elevation gain. Not a bad morning workout!