Quick word association: when I say “sand,” what do you say? Beach? Surf? Hawaii? Starfish?

Since I’ve lived in northern California

all my life, when I think of sand, I think of ocean beaches. But I know that you find sand in deserts, too. And the color and texture of desert sand and beach sand vary depending on what rocks or minerals have been broken down by natural processes to form the sand. But generally, wherever you find it, sand is beige-y!

Yesterday morning and the day before, I had a chance to experience the most amazing sand I have ever seen – the white, almost powdery sand at White Sands National Monument in the state of New Mexico. I had wanted to visit there for several years, so when my husband and I planned our trip to New Mexico to celebrate our wedding anniversary and the State’s 100th birthday, we included the Monument on the itinerary. 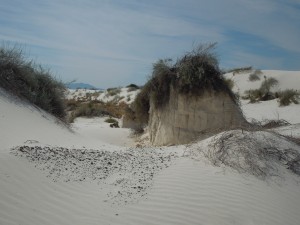 In case you’re wondering, the sand gets its whiteness and smooth texture from gypsum that washes down from the mountains. It is water soluble, so it would normally be carried away in streams or rivers to the ocean. But there is no drainage from Tularosa Basin where the gypsum-laden water collects in Lake Lucero during the monsoon season. After the rains stop, the water evaporates, leaving behind the gypsum in the form of selenite crystals that are broken down by the elements into particles light enough to be moved and sculpted by the wind.

If you ever plan to experience White Sands National Monument, I would recommend ordering up a cloudscape and arriving just before sunrise! On Monday, we were there in the early afternoon. The brightness was overwhelming, and it was difficult to take photos. So we returned yesterday morning, our 30th anniversary, from where we had spent the night in Cloudcroft (30 or so miles away). As you can see, nature was in a beautifully giving mood! 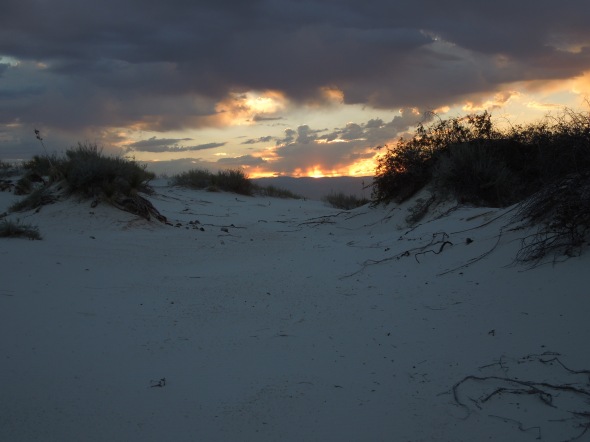 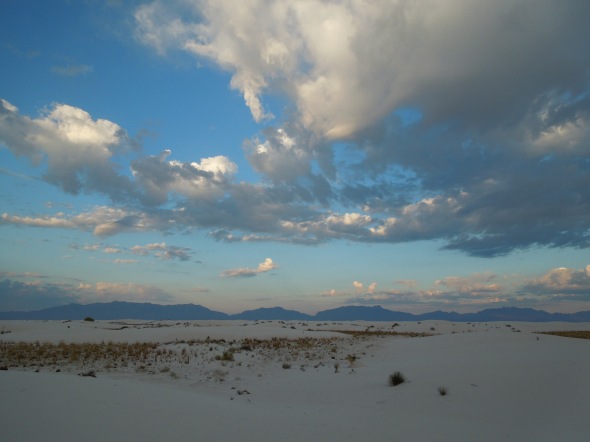